Playing Pickup at the House that Ed Built

Share All sharing options for: Playing Pickup at the House that Ed Built

Monday, I tricked everyone into thinking I'm a "media member" and got a chance to run at the Wach.  For the full story, some pics, and a detailed description of why my team would have played better if we switched to the 2-3, click below the fold.

Since the proprietor of this here blog lives in Mountain Time, when the invitation came from the Sixers to come see the new court, I got the call.  I was under the impression that it would be some sort of unveiling with oversized scissors and a huge sheet covering the whole court while the three Ed's smile for hundreds of thousands of the same picture.

I was getting my polo shirt and khaki shorts ready so I could blend in with the normal media types when I got an e-mail from Press man Michael Preston telling me to (and I quote) "come ready to play" and that we (the press), would have the court for 2 hours.  This is only about 12 hours before I am supposed to arrive at the court, and now I'm finding out that I have to play?  So at this point, I'm flipping out, and for the first time in my life, giving serious thought to what I'm going to wear.  Wary of an elaborate plan schemed by Jordan, Mike Preston, and Hip Hop, I brought a polo and khaki shorts just in case.  It is here that we adopt the present tense -- come along for the ride.

So I head to the Wach early, sneak in through the employees entrance, and end up at some sort of check-in point.  I introduce myself to the 30-something blonde at the desk as "Mike from Liberty Ballers" anticipating that she has no clue what most of those words mean.  To my surprise, she nods and asks if I know where the court is.  A direct hit to my fandom, I reply that I do not.  I sign a waiver form which I can only assume is to ensure that when I hit my face on the rim during the dunk contest portion of the afternoon and get blood all over the new court, I couldn't sue Comcast (If that ever were to happen, I wouldn't dream about suing, my only demand would be a 10-day contract -- if Jamaal Magloire can make a roster, so can I).

The blonde, walking 4 steps in front with zero attempt at a conversation, leads me to the court via the dungeon-like passageways.  Boiler rooms on both sides, boxes full of various equipment, my mind wanders to a WWE event, where a tables, ladders, and chairs match must have strayed.  A short time later, we turn a corner and I spot the court beyond the tunnel.

My first view of the hardwood is impeded by hundreds of 8-year-olds from a day camp scuffing up the court with their Jordan XX4's.  The blonde drops me off with a smaller woman from Comcast who immediately forgets my name and introduces me as Matt.  She directs me to wait on the bench until noon, while the camp counselors and Sixers staff engage in a co-ed friendly-turned-intense game of half court ball announced by the mother of all MC's, World B. Free.  World gives what I imagine is an attempt at a motivational, heartwarming speech, but I heard the words "kids are going to die" and "I've seen many kids die from doin' drugs."  Scare tactic approach from Mr. Free. 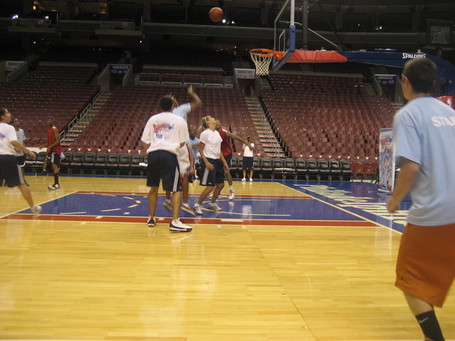 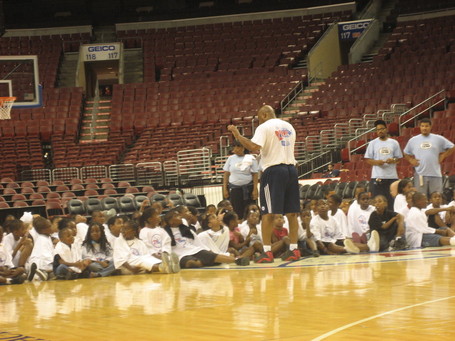 Sitting at the end of the bench doing my best Kareem Rush impression (BURN!), I'm still waiting for any other bloggers or local media to arrive.  At this point I really have no idea what to expect, but the absence of a camera crew signified to me that I DVR'ed SportsNITE for no reason.  While I'm not expecting Phil Jasner to walk through the tunnel with high tops, I'm holding out hope for at least Bob Ford.  The camp kids file out with some new merch and some of the media start to come in.

The first guy I meet is Enrico from the700level, a 28-year-old from Media.  As the rest of the guys file in, I find out that in addition to Pete from ReclinerGM (who hit the first trey on the new court), mostly everyone else were Comcast media guys about 30 years old, making me the youngest by about 10 years.  Shooting around for the first 15 minutes or so, I tried to dribble around to different spots on the court to get a feel for it.  The floor seemed to have a few dead spots, but I'm sure it will be fixed and tightened before the season.

What really got me when we started to play was how much of a difference the 94 foot court is compared to the high school 84 feet, and a lot of playground courts around 74'.  After a few trips up and down, I was already winded.  I got used to it pretty quickly, but if you're walking the court, you really have no shot at being involved in a play.  It made me appreciate the Sixers up and down tempo even more, and solidify my belief that it's better to play your starting 5 around 30 a game and have a deep bench that can supply fresh legs and good defense/fast break offense.

They supplied us with water, which was lovely, but no sixers merchandise.  I was looking forward to some free stuff, I guess us bloggers aren't quite on that level yet.  I'm not gonna complain, 'cause hey, I'm playing pickup basketball at the friggin' Wachovia Center.  We played three games and everyone kept a level head, joking around, mostly about Dalembert's ineptitude and propensity to take turnaround jumpers from 18 feet out.  Unfortunately I couldn't get any interviews because there weren't any front office guys there, but I think I may have spotted Royal Ivey walk in with his agent to check out the court.  That may be false, because he was in the stands and I was on the court, but I imagine the players want to get a look at the court as well.

It was a very awesome opportunity to play some ball on the court and take some sweet pics (below), and thanks to Jordan and Mike Preston for the opportunity.  I'm not sure how other teams do it, but to let some minor media members play on the court is a way to get some good publicity for little cost.  Apologies I can't put it into better words other than "it was a good time" but that's really all it was.

Also, big ups to my summer league basketball team for winning the championship last night, those playoffs are the primary reason I didn't get this out sooner.  Here are the pics I took at the event: 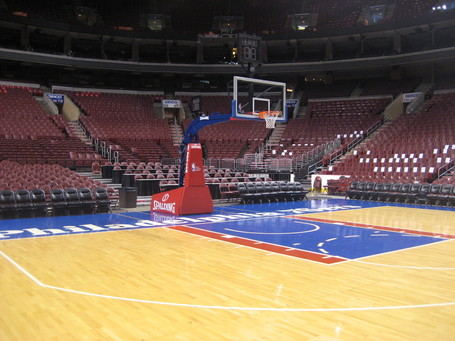 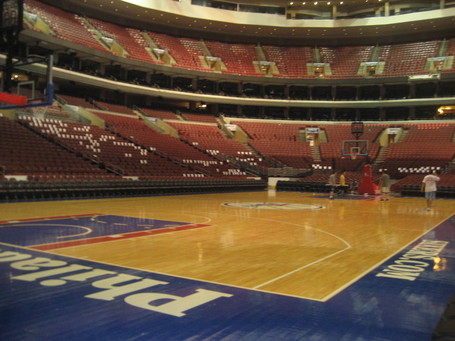 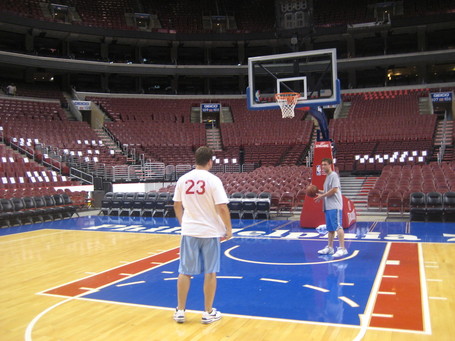 Comcast guys shooting around in between games. 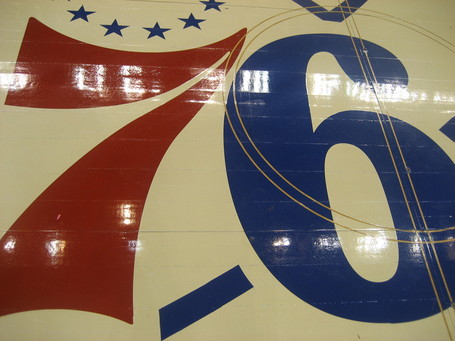 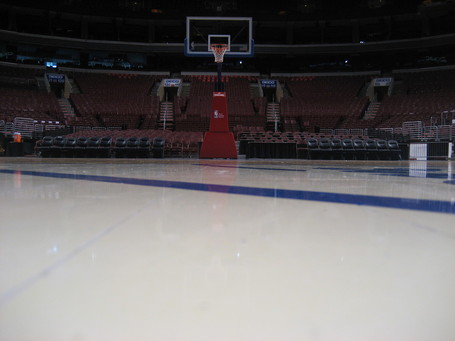 View from the half court circle. 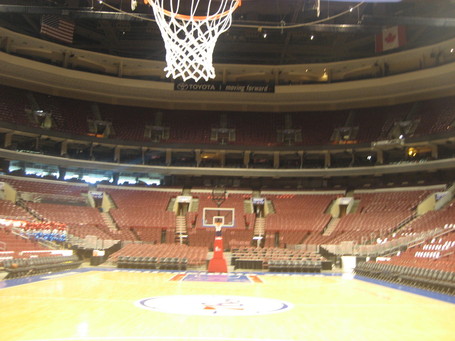 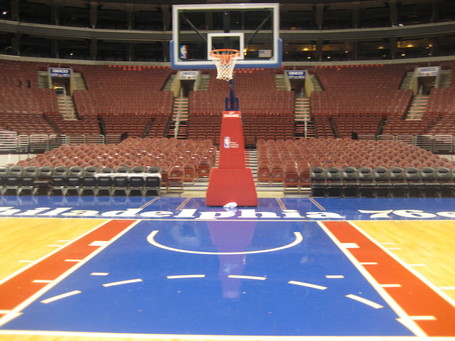 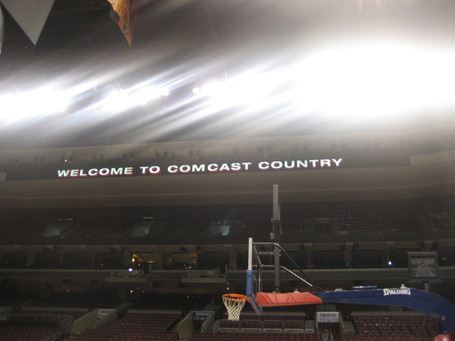 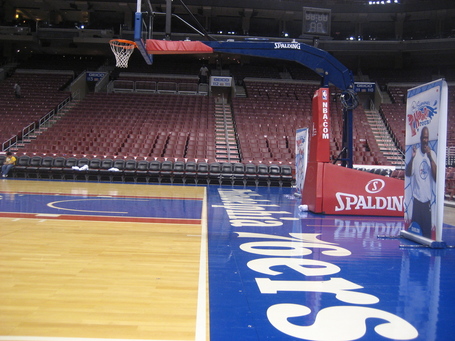