During my first credentialed week at an NBA event I had the privilege of meeting an abundance of "dope" people. One of the many benefits of meeting these "dope" folk was the opportunity to pick their brain. Whether it was exchanging funny stories,  "shooting the ish" as they say, or getting the scoop on inside information around the league, I couldn't have asked for a better experience.

There were many times throughout the week where I heard rumors surface, and rumors die. Since the whole experience was new and exciting to me, I came home at night and thought to myself, "Dude, I know stuff the average NBA fan would kill to know. This is freakin' awesome!"

A source associated with the Blazers informed me the Sixers nearly traded Andre Iguodala to Portland on draft night. The rumored deal was for either Travis Outlaw and Steve Blake or Travis Outlaw and Jerryd Bayless. Normally when a rumor of this nature crosses my path, I dismiss it for the filthy nonsense it really is and go about my business, but since it was coming from a reliable source, I had to listen.

My first reaction was, "What? Why would they do that?" The answer: salary dump.

Luckily, the rumor was shot down a few hours later by someone I consider a more reliable source, basically saying it would never happen.

It made sense though. The country is in a recession, ticket sales are down, and Andre is the highest paid Sixer that any team would be interested in acquiring. The rumor evoked flashbacks on the entire off-season as a whole, and I began connecting the dots like the final scene in The Usual Suspects.

No contract for Andre Miller, no Summer League team, the inability to move into the second round of the draft, various rumors of Sam Dalembert and Elton Brand being actively shopped -- it all made sense.

This is nothing new, but the economy is killing the Sixers -- and killing 'em pretty bad. Usually a situation like this warrants criticism towards the owner or the general manager; however I'm placing the blame on us -- the fans. For the sake of keepin' it real... we suck.

During the couple hours where I truly believed the Sixers were desperate enough to trade Andre I thought to myself, "Why don't the Sixers sell tickets?" and "Why don't Sixers fans care as much as they did when Iverson was here?" I could not come up one definitive answer, so I took it upon myself to change it -- or at least try.

Our beloved Sixers need us more than ever. Below is an open letter to Sixers fans and anyone else willing to listen.

Despite reaching the playoffs for two consecutive seasons and providing 'the favorites' with a legitimate scare each time, the Sixers still ranked in the bottom third of NBA attendance numbers.

The Sixers provide us with at least one of these every game, yet our crowds are among the quietest in the league, and often claim "three-pointers are more exciting."

Fans seem to lack passion for the Sixers because no one considers Andre Iguodala "star player".

I could go on forever.

So, what is it? What do fans look for in their favorite team? Three-pointers? A "star player"? The Bash Brothers? Before I take a stab at the asnwer, I must first discover what I look for in a favorite team. Here's the list I came up with:

Oh, you mean like this? Or this? Or this? Needless to say, the Sixers are one of -- if not the -- most athletic team in the NBA. And what basketball fan doesn't like a good, old fashion posterization? Odds are, if you watch the Sixers on a given night, you are going to be entertained.

The Sixers were involved in 12, count 'em, 12 buzzer-beaters this year. That is entertaining right?

Andre Iguodala ranked third in the entire NBA in dunks with 150 -- nearly two per game. These are entertaining right?

How easy is it to be enthusiastic about your favorite team when the local play-by-play guy is making these types of calls?

Seriously, give me one announcer besides Gus Johnson who shows more passion on a consistent basis than Marc Zumoff.

I would not have been able to argue with you a year ago on whether the Sixers uniforms were "sexy" or not. I'll tell you flat-out, I could not stand the old uniforms. The keyword is "old". Earlier this season the Sixers announced that they will be returning to the throwback logo and jerseys similar to the ones they wore during their last championship.

Honestly, how good does Andre Iguodala look in this jersey? 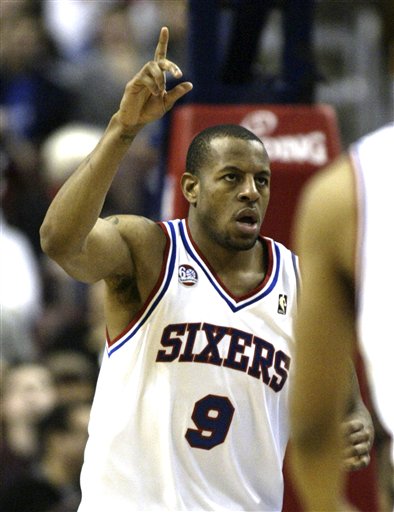 For a look at Tony DiLeo insane drafting skills, I take you back to my Blueprint for Success post.

According to the team's official site, DiLeo was promoted to Senior Vice President/Assistant General Manager in 2003. Since then, the Sixers have feasted on the NBA Draft.

2003: The Sixers first and only pick was number 50 -- not a prime position to be in. They ended up selecting Paccelis Morlende. Who? They quickly turned around and traded him, along with cash, to the Sonics for Willie Green. Like it or not, Willie Green is a good value at pick 50. The Sixers also sent cash to the Nets in exchange forKyle Korver.

I'd say, going into the draft with the 50th overall pick, and coming out with Willie Green and Kyle Kover is pretty dang good. First year with DiLeo as assistant GM -- success.

2004: The Sixers went into the draft with the ninth pick. They came out with a franchise player in Andre Iguodala. Success. DiLeo is two for two.

2005: The Sixers had no first-rounders once again, just pick number 45 . Last time they stole Green and Korver. Who'd they pick this time? Louis Williams. Whether you love him or hate him, Lou was an absolute steal at number 45.

2006: The year of "Oh we really need a point guard, but Rodney Carney's available!" Man, good thing there were no legitimate point guards on the board when the Sixers traded down from pick 13 to pick 16 to select Rodney Carney. Oh wait, there were. Just to name a few: Rajon Rondo, Marcus Williams, Kyle Lowry, Jordan Famar, Sergio Rodriguez, and Daniel Gibson. Oops. This is DiLeo's one blemish in his six years as assistant GM.

2009: Jrue Holiday with pick 17. Jrue has the potential to be the steal of the draft, and DiLeo's track record leads me to believe just that.

The Sixers have made the playoffs the previous two season with a relatively young team, and there's no reason to believe they won't make it three straight years in 2009-2010.

Here are the ages of the core guys who have helped lead the team to back-to-back playoff appearances.

* Not on playoff roster.

The Sixers chances of winning a championship rest solely on the development of the young guys, and after watching Andre Iguodala and Thad Young for the past two seasons, I'm confident they have the ability to develop into championship players.

So, what is preventing you from getting excited about this team?

I've provided you with five legitimate reasons to rejuvenate your passion for the 76ers, so go out there and do it. Whether you buy season tickets, buy merchandise, or simply cheer your ass when you attend the games, do it for the Sixers.

Because if you don't, the frightening Iguodala rumor might one day become reality.