Getting to know Eddie Jordan

Share All sharing options for: Getting to know Eddie Jordan 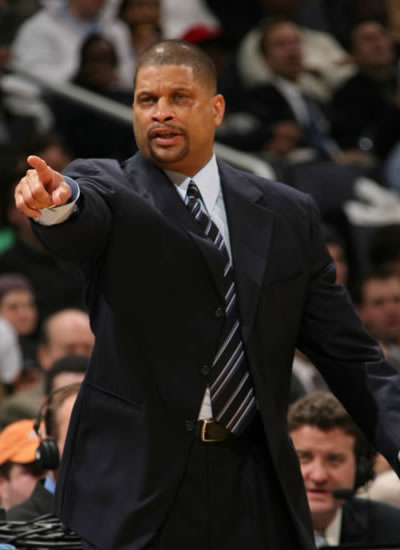 Since the day Mo Cheeks was fired, Eddie Jordan's name has been tossed around as a possible replacement. I've heard conflicting stories about his coaching style and gone back and forth with my opinion of him, so I decided to seek the "expert" opinion of Wizards blogger JakeTheSnake to get the real scoop.

Liberty Ballers: What were your overall feelings about Eddie Jordan when he was the Wizards coach?

Jake: In my mind, Eddie Jordan is a very solid coach. Sure, you won't put his name alongside the greats in the league like Jackson, Poppovich, and Sloan, but he can take the talent that you give him and make it better. I don't think it's a coincidence that players like Gilbert Arenas, Caron Butler, Larry Hughes, Jared Jeffries, and DeShawn Stevenson all enjoyed career years under his tutelage.

He'll always have a special place in the hearts of Wizards fans because he was able to lead the Wizards out of the first round of the playoffs in 2005. For some franchises that might not mean a whole lot, but considering it's the only happened it's happened here in the last quarter century, that's pretty special.

Liberty Ballers: What were his strengths? Weaknesses?

Jake: His greatest strength definitely comes on the offensive side of the ball. His Princeton offense comes with a steep learning curve for some, but once you see a player start to understand the system, it's a beautiful thing.

He's also not an ego-driven coach. You won't see him trying to make himself the story or burying players on the bench just to show who's in charge. The one exception to this rule being the saga he once had with Brendan Haywood back in 2006-07, but he also went out of his way to resolve the issue that off-season.

His greatest weakness is always going to be defense. Sure, he might not have had the roster in Washington to form a top-notch defense, but there were some fundamental problems with his defensive schemes that kept the squad from even being average on the defensive end. His other weakness is that sometimes you'll see him rely more on players who look like they're giving effort, even if they don't produce that much (see Ruffin, Michael). If Jordan ends up in Philly and you end up lamenting that Reggie Evans is getting more playing time than Marreese Speights, remember that I said this.

Liberty Ballers: In an average year, how many times did you write the phrase "We were out-coached tonight," in your recaps while Jordan was the coach?

Jake: Admittedly, I'm not the best evaluator of in-game coaching decisions and I didn't write many recaps until after Jordan was fired, but if I had to guess I'd say he was out-coached a little less than half the time. In other words, his won-loss record when the team was healthy was indicative of what kind of success he had in the coaching battle. More times than not when he was out-coached it was because of poor substitution patterns rather than bad X's and O's.

Liberty Ballers: How do you think the players responded to Jordan? Did they respect him?

Jake: Jordan had a rep as a player's coach in Washington and I think that the team's performance reflected that. You didn't see too many nights where the team didn't show up or looked disinterested. There were a lot of times where the Wizards would beat good teams and lose to bad teams in a very short span and people would attribute that to a lack of effort, but I think that's just a byproduct of having an explosive offensive team that can't stop anyone. They were good enough to outscore anyone but they were so bad defensively that they could never run away from anyone either.

Jake: It's hard to really say because Jordan is the only coach that Gilbert has worked with in Washington (unless you count the two games he played with Ed Tapscott), so I don't have another example to compare it with. Some fans think that Jordan did a good job of understanding Gilbert's quirks and working around them to keep everything flowing smoothly, but there are others that think he gave Gilbert too much free reign. I stand somewhere in the middle (cop out!): He wasn't cracking down on every goofy thing he did, which was a good thing since most of it is harmless, but there were times where I think everyone would have been better served if he had put his foot down a little more.

Liberty Ballers: Jordan never won more than 45 games as the Wizards coach. Do you think he should have won more? Or was 45 wins the best he could do with the Wizards roster?

Jake: If the team had stayed healthy, I think the team was capable of winning 50 games. The injuries he had to deal with negatively skew his win-loss percentage (44.4%), but even if the team was fully healthy, I don't think we're looking at a coach that's championship calibur on a consistent basis. Without a defense, it's hard to expect much more than 50 wins per season, unless your name is Mike D'Antoni.

Liberty Ballers: Did you ever feel that the Wizards were unprepared or unfocused under Jordan?

Jake: Not really. Like I said before, Eddie was a player's coach and the relationship that he had with the players made it easier to get consistent performance out of them every night. Every team has times when they look unprepared or unfocused, but I think Eddie was better at cutting down on than most coaches.

I want to thank Jake for taking the time to answer my questions. Now I have a better understanding of Eddie Jordan the coach. My newly formed opinion: One wore sums it up -- solid. Would I be super-psyched if we signed him? No. Would I be bummed? No. He seems like a super-solid coach, and much better than Tony DiLeo. I don't like the fact that his weakness is defense, but hey, I'm sure the perimeter defense can't get much worse can it? I think the biggest beneficiary of his Princeton offense would be Thaddeus Young, and that's exactly what this team needs -- Thad to develop into a star.

EJ is beginning to look like my favorite coaching candidate.