Share All sharing options for: Recap: Just the positives

There's been way too much negativity surrounding the Sixers play the past couple games, and albeit for good reason, I'm just going to focus on the positives from tonight's loss to the Bobcats.

First of all, I already had a mini-rant on the Sixers effort and whether they "want" to win or not in the thread below this, so if you're interested in that, check it out. I'm not going to repeat myself in the recap for everyone's sake. Plus, it has a little negative vibe to it.

On to the good.

The best thing about tonight's loss was the fact that Miami lost too. No ground was lost in the race for the fifth seed.

Whether it was the name change, the stitches, or just an aberration, Bill Green played the best basketball game I've ever seen him play. The Sixers came out of the locker room down 14 points and in the blink of an eye, the lead was cut to three. And It was all thanks to Bill Green. He hustled for loose balls, he hit open shots, including three threes. He played tenacious defense, he gave the team an energy boost, and he set up his teammates beautifully. What? Are we talking about the same Bill Green? Yes. Bill Green played out of his mind tonight, and was mostly responsible for the Sixers furious comeback. Say what you want about shooting guard from Detroit Mercy, but I'm finally starting to come around on him. Now if he could just play like this more often...

Lou Williams has been impressive of late. Tonight he carried the team in the first half by dropping 17 of his 20 points in the first two quarters. Without him the Sixers would have probably been down 40 at the break. Lou is at his best when he's getting to the hoop and either a) making easy buckets b) getting to the foul line or c) setting his teammates up. Tonight he did all three. The best thing about Lou is he's becoming consistent. Not consistently good or consistently bad, but consistently smart. No longer is he settling for jump shots every night. Someone must have had a sit-down with him and told him, "Yo Lou, you have an uncanny ability to get to the rack -- use it." Whatever it is, I like the new Lou-Will and hope he sticks around for a while. He didn't get much burn in the second half with the emergence of Bill Green, but unlike the first half, he wasn't needed.

Marreese Speights is the final piece of "good" that I'm going to mention. His defense and rebounding still need work -- we've established that -- but what I like about M16 is that he's trying to improve, and we saw some of it pay off tonight. Marreese had two specific plays that I was especially excited about. The first was a charge he took on Gerald Wallace. Marreese has attempted to take a charge or two in nearly every game this season, to no avail, and I've often criticized him for it. This time it worked. Wallace had been blowing by every defender put in his path all game long. Mid-way through the fourth, Speights found himself matched up on the Sixers killer, and Wallace tried to drive to the basket like he had been all game, only to be met by the feet-moving, charge-taking Marreese Speights. The second was nothing new for Mr. M16. I still have no idea how he caught it and no idea how he finished it, but Speights threw down one of the sickest in-game alley-oops I've seen in a while. (Props to Iggy for the sick pass.) My favorite part about the oop was not the dunk itself, but Speights reaction to it. He let out an intense Kevin Garnett scream and prompted me to do the same couch-side.

Another loss I'm going to put behind me. I'm ready to get back to work on Thursday when we face the surging Bulls on TNT.

P.S. Click though for a closer look at what shall be forever known as Bill Green's coming out quarter. 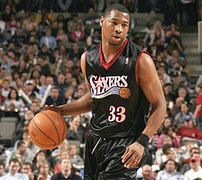