Bumped up from the FanPosts [ed.]

Well thanks to our fearless leader jsams, I have officially started to get all pumped for the NBA Draft. Now I think many of us can agree that the Sixers should choose a point guard with their first overall selection as we see Andre Miller increasing in age and Lou's inability to consistently run the offense. Lucky for the Sixers, this year's draft is very deep at the point guard position. Instead of concentrating on all of the point guards available, I will just touch on the ones that are likely to fall to where the Sixers will select and even those that could be a diamond in the rough in the second round.

Right off the bat we can eliminate Brandon Jennings from the Italian League, Jeff Teague of Wake Forest (#6 on both DraftExpress and NBAdraft.net), and Stephen Curry (#7 on DraftExpress and #14 on NBAdraft.net). Although NBAdraft.net indicates he may fall to the Sixers after the tournament, I still don't wish to talk to about him because, like our very own jemagee has already said "if he falls, there must be a reason." Curry is not a true point guard and put up those astounding numbers (last year by the way) against very mediocre competition. I can't wait until somebody takes Curry and tries to make him the guy who puts the team in motion.  He would be much better used as a wingman coming off screens for threes in bunches.

Projected #13 DraftExpress and #23 on NBAdraft.net 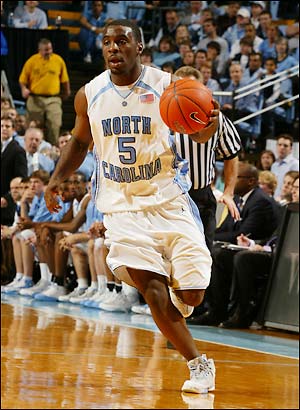 Just named 2008-2009 ACC Player of the Year.  Lawson is one of the quickest players baseline to baseline in the country. He has the distinct ability to beat every single player down the court on the inbounds and catching the opposing team off guard. One thing surrounding him that could be a weakness before last year's draft was his mediocre three point shooting. In just the span of one season he has gone from 36% to 46.7% from beyond the arch; even coming when the college three was moved back one foot from last season to this season. Lawson doesn't take a large quantity of two point shots that are not lay ups or takes to the hole, so that part of his game is suspect to how it may translate in the NBA. His incredible instinct to know where the ball needs to be and where his team can take advantage of mismatches solidifies him as one of the best point guards in the college game today. Lawson possesses one of the best Assist/Turnover Ratios at 3.32 and has an outstanding Assist/Possession Percentage of 32% (meaning 32% of his possessions end in an assist). In addition to be named player of the year, he made Honorable Mention for the ACC All-Defensive Team. He should have no problem staying with the rest of the league's guards and has an above average skill at lock down defending.  Lawson is the only one of the PG's I have seen play in person. He came to the University of Maryland as an opponent two years ago and about a month ago. Both times he had me in awe at his speed and tremendous ability to finish on the break (something that would greatly benefit him with the system the Sixers like to run.... no pun intended).

Projected #27 on DraftExpress and #10 on NBAdraft.net 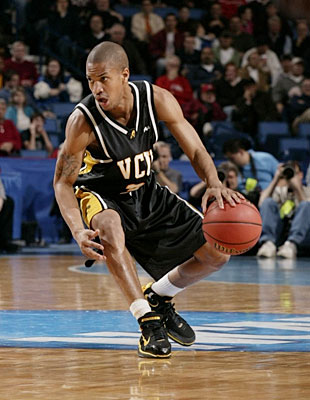 Mayor became a household name with college basketball fans two years ago when he lead the Rams to an upset victory over Dook (some like to say Duke) in the NCAA Tournament. Maynor has an uncanny ability to take over games late and do anything necessary for his team to win. Although his Assist/Turnover Ratio has declined from 3.32 last season 2.08 this season, he still gets teammates involved as much as a point guard needs to. This decline has resulted from the fact that this year is his first year as the team's first scoring option. In addition, his assist/possession percentage is a solid 22%, yes it's down from Lawson's but Maynor doesn't have the weapons Lawson does that enable him to not shoot as much. Maynor has added a full 8 points per game to last year's average to bring it up to 22 from 14. Along with his scoring ability, Maynor has above average true point guard skills.  He has a very quick first step and excellent ball handling abilities that should definitely lead to a successful NBA career. Like Lawson, Maynor's mid-range game is suspect but I figure, with the tutelage of Andre Miller (assuming the Sixers can re-sign him) it should improve greatly. Another weakness Maynor has is that he shoots a measly 36% around the basket (not good considering the Sixers like to fast break and take the ball to the basket).

Projected #23 on DraftExpress and #24 on NBAdraft.net 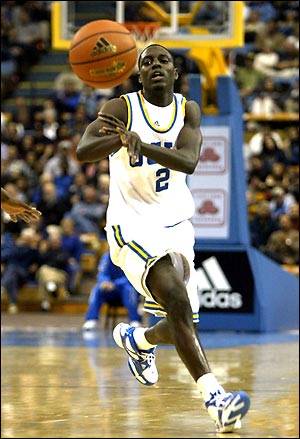 Collison tested the NBA draft waters last year but was encouraged by coach Ben Howland to return for his senior season at UCLA. Collison hasn't distinctively gotten any better in most areas of his game but has made some subtle improvements. First off he is from Rancho Cucamonga which is probably the most fun hometown to say.  Collison has slightly improved his scoring but has improved his Assist/Turnover Ratio by about .5 and as an above average Assist/Possession Percentage of 27%.  The best part about Collison is that he is arguably the best perimeter defender in college today, something the Sixers greatly need. Not only would his perimeter defense help, he shoots an astounding 92.3% from the free throw line.  Now as a Sixers fan nobody can tell me they would not love to have a guy who could do that considering the amount of games the Sixers have lost this season from missed free throws. Collison has a knack for finding the open shot and is back up by his 53.7% shooting this season. His three point shooting is suspect as it has gone down a full 10% from last season which could be from the fact that the line was moved back (not something to be encouraged about considering the NBA line is even further back).  As proven from his college game, Collison needs one if not two succesful wing players to be a force on the court (which he should have on the Sixers assumign Iggy and Thad get to move to the 2 and 3 respectively). The only problem with Collison is that there really isn't much upside to him and that he may not ever be a consistent starter in the league.

Projected #28 on DraftExpress and Not Entering on NBAdraft.net 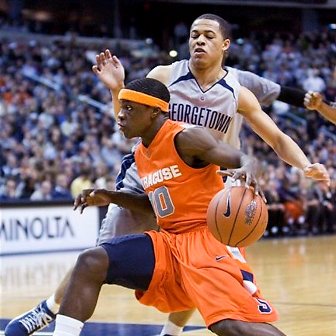 Flynn is a little shorter (6') than the average point guard in the NBA. What Flynn lacks in size, he makes up for with explosiveness and quickness off the dribble. Flynn would be a project and would ridiculously benefit from being under Andre Miller for about 2-3 years. Flynn's court vision is one of his strengths as he seemingly always finds the open man when he runs the half-court offense. He averages near 7 assists a game (6.4) and has an Assist/Turnover Ratio of 1.95 for the second straight season (not to mention an above average Assist/Possession Percentage of 26%). He gets to the basket very easily and has a knack for finishing while also going to the free throw stripe (almost 200 FTA's this season while shooting an average 77% from the line).  One thing he must improve on is that when he does drive to the basket, he only wants to shoot and if that doesn't work out, he refers to a jump pass that normally gets tipped or stolen (sound like anyone the Sixers have now?). Flynn must improve his three point shooting if he wants to be successful in the NBA and become a franchise point guard seeing as he's only shooting 34% from outside this season.  Although Flynn doesn't put up the flashy numbers in college that the others above have done, he does have a tremendous upside much like Rajon Rondo did when he was drafted.

Projected #43 on DraftExpress and #27 on NBAdraft.net 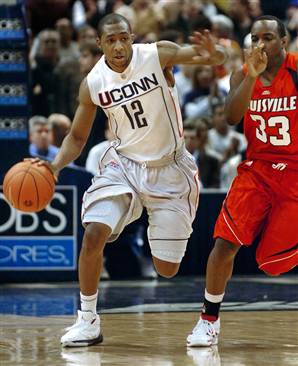 AJ Price didn't get off to the best start to his college career. He was caught stealing laptops his freshman season which lead to a season-long suspension and tore his ACL last season in the tournament. Many scouts have compared him to a Mo Williams type player. Price's points and assists have gone down this season while his turnovers have gone up. This is not a fact that you want to see as a fan of an NBA team who needs a point guard. Even though his turnovers have gone up he still possesses a solid 1.81 A/TO Ratio and a 24% A/POS Percentage. Price possesses many true point guard skills such as being a floor general, making smart passes, and distributing the ball evenly. Price normally stays on the outside during playing time as shown by his decrease in FT's by a full 60 shots this season from last (took only 86 FT's this year). Not only did his FT's decrease, but his FT% went down from 75% to 70%, definitely something the Sixers are not looking for. One aspect of his game that is very good is his three point shooting. Price is shooting 42% from the trifecta, which is an increase in 6% even coming from an increase in attempts. Price is looking like a second round pick right now and probably will not be selected by the 76ers as I expect them to use their first round pick on their next PG.

Projected #15 on DraftExpress and Not Entering on NBAdraft.net 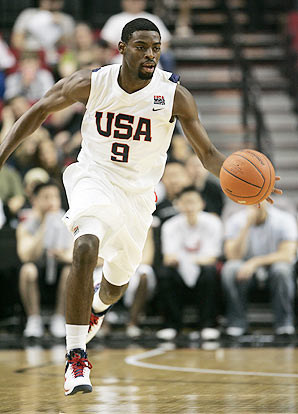 Evans was the #1 recruit in the country according to many scouts this season and just like Derrick Rose the year before, he landed in Memphis. He started out playing the 2 guard but because of Memphis' early round struggles, Evans was switched to play the point. Evans is a flat out scorer who has great body control and runs the break better than any point guard (maybe with exception to Lawson) in the country.  He has a tremendous ability to finish around the basket and get fouled en route.  Since moving to the point Evans is averaging 3.77 assists per game and 18 points.  The one problem with running him at the point is that he is a ball dominant player.  Plays at Memphis are all run around him which could be why his scoring average is what it is. He doesn't shoot particularly well from the 3 point line (30%) and also very poor shooting off the dribble (25%). Evans defense, on the other hand, is a plus towards his draft stock as he becomes a hassle for other teams because of his ability to get in the passing lanes. Another positive that would come from Evans going to the Sixers is that he is a hometown hero from nearby Chester.  If the Sixers want to increase attendance and awareness, I do believe Evans will be their selection if still available.  Evans' size is something that can create mismatches on the offensive end as he stands at 6'5", taller than most PG's in the league. Many say he should move to SG but as shown this year, he has trouble shooting the outside shot and excels with his first step dribble and getting to the basket and finishing.

Well there are most of the PG's available where the Sixers will be picking either in the first or second round (depending on where they want to pick one). I was going to include Patrick Mills (who I dearly love) and Nick Calathes but since the weekend games, both draft boards have taken them off completely and put them into the 2010 draft. Let me know what you guys think and what your choice for the PG of the future would be. Right now I think my order would be: Lawson, Collison, Maynor, Evans, Flynn, Price.

And in ture LibertyBallers form is a fantastic YouTube clip