So last week TAFKA Mike Bourn put up a draft poll concerning what type of player we at Liberty Ballers felt should warrant a look from the front office come draft time.  Well my partner in crime (Silent Destruction still in effect baby - don't call it a comeback we've been here for years!), I see your draft poll and raise you a player preview.  The winning position in the poll was center but guess what, it doesn't matter what the poll says!  Considering we have 200 some days until the draft there is plenty of time to preview any and every possible player that could head the Sixers way come June. So for the first one I'm gonna switch things up and go with a guy who can be a go-to scorer that this team needs in the future (if only we could get Allen Iverson back!). It is a man who shares the same first name as the most popular player on the Sixers roster, a man with a forehead big enough you could call it a five-head (Shelden Williams begs to differ).  It is, of course, that other guy on Blake Griffin's college team; Willie "why must I share a name with Mr. Green" Warren.

Currently projected to be a top 5 pick according to draftexpress.com, it is not out of the realm of possibility that Willie Warren becomes a member of the Sixers this summer.  The thing that will attract the front office about Warren is mainly his ability to flat-out score.  He's an excellent ball-handler with a knack for getting to the lane and finishing or getting to the stripe.  The thing that allows Warren to excel so much in driving to the basket is his ridiculously quick first step.  He has shown in his one full season of college ball so far that he has the ability to pass the quickest of guards en route to the hoop all with exquisite body control finishing through traffic.  What's that? There's more to his game when he has the ball?  You better believe it.  Willie has a tremendous hesitation dribble that keeps defenders off balance and can even pull up off the dribble and punish the opposition with a sweet mid-range J.

His three-point shooting ability is above average (hell, with the Sixers he'll look like Ray Allen out there) as he shot 38% from beyond the arc last season, a fair amount coming from NBA type range.  This year he's started off slow in the three-point shooting department, but it's only been five games and as John would tell you, small sample size.  One thing that irks some about his shooting ability is his odd release and I agree it is a bit funky.  If he works on getting his shot off quicker than it currently stands, he could be deadly from outside.

You want athleticism?  Willie lives to serve.  I'll just let you watch some dunks he put on display so you can see for yourself (Iowa State, Texas Tech, Xavier Henry Meets Willie's Lower Region). 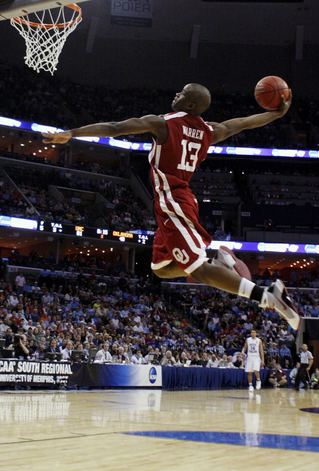 Warren has some court-vision to set up teammates but at times gets into a scorer's mentality where he knows going down the floor that he is the one taking the shot.  Here in-lies a dilemma with Mr. Warren.  He is listed as 6'4" but is more like 6'3".  Being a little undersized to play shooting guard in the NBA, Warren will have to adapt his game to also play the point guard position.  He needs to improve his ability to set up teammates (a la drive and kick) as he currently drifts to becoming a black-hole when getting by his defender.  But with his ball handling skills and passing ability, developing himself into a player that can occasionally play the point should not be a problem for Willie.

One thing that really makes him fit in with the Sixers is that his defense is suspect.  He has the tools to become an adequate if not elite defender (lateral quickness, length, intensity, etc.) but doesn't seem to put as much emphasis on this part of the game as he does offensively.  In addition, he doesn't have the size that would be ideal to stick most shooting guards in the league.  The most obvious choice would be to have defend the opposing point guard but without the defensive fundamentals he lacks, he will be yet another defensive liability, something the Sixers can not afford to keep taking on (but if Eddie Jordan is still around, who the hell cares about defense anyway?).  The potential to develop those skills is there, the issue is whether or not he's willing to work hard to attain them.

So there ya go folks, your first draft preview of the season (o man it's December - so far away).  Yes there is more that goes into analyzing Willie Warren's game but hey this is only a little preview.  Hopefully we can pump more of these out to throughout the season as the draft is looking like the only thing the Sixers got goin for them right now.  It's been prettay, prettay abysmal watching this team so far this year.  But hey at least Allen Iverson will take us to the promise land.