Brand returned. He looked rusty. The Sixers came out on fire in the first couple minutes. The rest was a dog fight. It was far from a pretty game, but a win's a win, whether it's ugly or not. The most important thing I saw tonight was that the Sixers run n' gun style of play did not change despite the return of Brand, regardless of what Walt Frazier might think. I think DiLeo has things under control a little bit better than Cheeks did.

Before I get into the rest of the game, I want to thank these two wonderful human beings for making the game an absolute pain for me to watch... 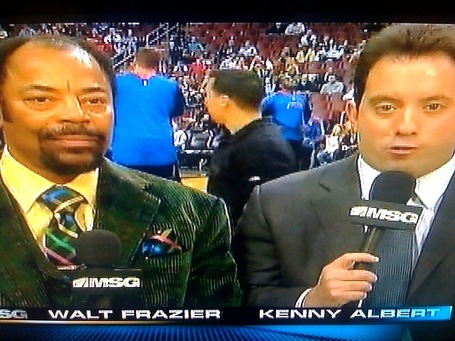 These two are by far the worst announcing combo of all-time. I'm not joking.

-Hanging on for a tough win

-Iggy manning up down the stretch

-Samuel Dalembert's all-around game. Frame that sentence folks. He played very good defense, blocking and contesting shots. He also rebounded well. He finished a couple times around the basket and although he made a couple, he limited the stupid plays. Bravo Sammy, bravo.

-Willie Green played kind of decent. It pained me to write that.

-The energy in the building to begin the game. Baby steps.

-15 threes allowed. They were all pretty much wide open. And they were mostly wide open because the Sixers continually double-teamed the likes of David Lee and Tim Thomas why? I think that falls on DiLeo's shoulders, unless the players are just stupid.

Bottom-line: This wasn't a game that makes you think, "Oh my God! Now that Elton's back we could be really good. I'm so glad we've gotten past 'playing down to our opponent'", but like I said before, a win is a win. 21-21. I'll take it. Next up are two good measuring stick games on the road against New Orleans and Houston. Stay tuned.