Share All sharing options for: Knicks at Sixers open thread 01/24/09

We are approximately six hours away from the moment we've all been waiting for--the return of Elton Brand. His return could not have been scheduled at a better time. Since the Sixers haven't played since last Monday, coach DiLeo has had a chance to integrate him back into the offense, the players have had a chance to play with him and Brand's had a chance to test his injured shoulder. Not only that, but we as fans have had four days to anticipate, predict and dream about this game.

I'm sure we've all seen this quote/statement written in about 40 different ways.

Coach Tony DiLeo said the plan is to have Brand come off the bench that nightand play in "short stints" of four, five or six minutes.

That's the plan for tonight and I think it will go over well. It allows the starting lineup of Miller, Green, Iggy, Thad and Sam to continue to do what they've been doing and Brand will essentially take Reggie Evans spot in the second unit. You can make the case that the starting lineup plays better without Brand, but you can't tell me that the second unit is better off with Reggie than Elton. Speaking of the second unit, Phil Jasner has a cool article on Brand starting the headband trend with the bench players this week and we get to see the "Head-banded Bunch" in action in this Dei Lynam video. I love it when players where headbands, especially when it's a unity thing. If they wear them tonight, I'm going to bust mine while I watch.

In other fashion news, the Sixers will be rockin' the throwbacks tonight and we found out yesterday that they will become permanent starting next season. I've been waiting for the switch for a long time now and I couldn't be happier. So, tonight when you watch Mo Speights throw down on 5 Knicks at the same time, in the throwback uniform, relish in the fact that we'll be seeing that very image for years to come.

And here's an interesting fact for tonight's game. The Knicks and Sixers have played twice this season. The Sixers have won both games and both wins got them to .500 on the season. When the Sixers first played the Knicks they were 0-1 and a win improved their record to 1-1. For the second matchup they were 19-20 and win made them 20-20. And tonight, they head into the game at 20-21. A win would get them to 21-21. A very interesting pattern is developing here. Hopefully next time we play the Knicks, we'll already be over .500.

Ultimately, I'm super-geeked for tonight's game. I expect Brand's return to be a triumphant one. A home game against the Knicks, plus four days off, plus the return of arguably our best player should equal win number 21. 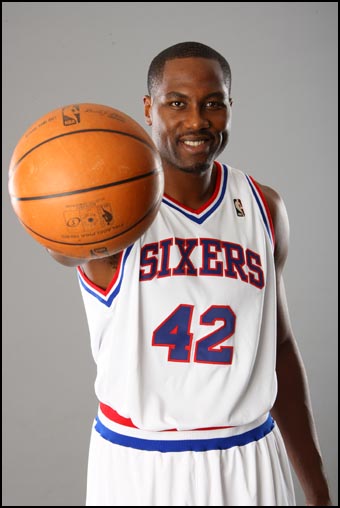