Is it Saturday yet?

Share All sharing options for: Is it Saturday yet?

It feels like we've gone months without a Sixers game. I'm starting to get antsy. Brand's set to make his (hopefully) triumphant return on Saturday against the Knicks, which should result in a win, but you never know.

The plan is to have Elton come off the bench and "provide a spark" until he's completely healthy. I think it's the right move. But anyway, enough about Brand. The purpose of this post was to cure my boredom and get the juices flowing.

There's really nothing relevant going on in Sixerland right now, besides the anticipation of Saturday's game, Brand's return and waiting to see if Speights and Thad will be robbed out of a rookie/sophomore game.

Speaking of all-star weekend, the reserves will be announced either tonight or next Thursday; I'm not 100% sure, but if Sammy D makes the ASG (he received the second most votes at center behind D12) it will be an absolute joke. I'm pretty sure the coaches select the reserves though, and if that's the case, there's no chance he makes it. But what about the Andre's? Any chance they get chosen? We'll see. I think at least one of them deserves consideration.

One more thing I want to do with this post is get your juices flowing. If you're as bored as me, answer these questions about the first half of the season:

5. If you were Ed Stefanski for a 24 hours what move would you make?

Mine for example, would be to get rid of this guy.... 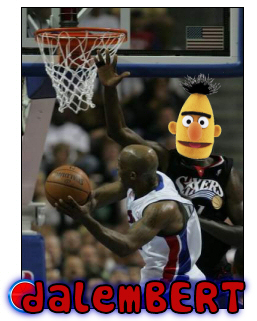