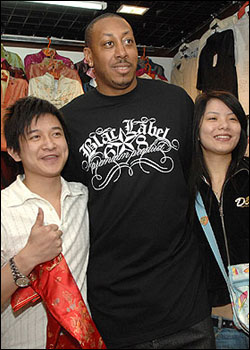 "i forgot what happiness felt like."--SexualTyrannosaurus.....Me too.

(Alright, I'm exhausted, so here are some quick thoughts then I'm going to bed. Oh yeah, and excuse me if I react like we just won the championship. I've waited all year for a win like this. Let the overreacting begin.)

-Donyell Marshall aka Fat Ludacris for MVP. He made a monster three and then came down and got a block on the game-tying shot, which pretty much sealed the game. I love Donyell.

-People might say the Sixers play better without Elton, and tonight I think that's 100% true, but in the long run, the team with Elton has a much higher ceiling than the one that played tonight.

-The Andre's are playing much, much better. Iggy's shot is looking smooth, but took some questionable shots down the stretch.

-Speights was alright in his first career start. He showed some jitters, but also some good things. No worries, he's young.

-Donyell Marshall is my hero.

-Thad was Thad. He's been in a slump as of late, but tonight he made a bunch of smart basketball and committed no turnovers.

-Sam continues to ride the pine for most of the game.

-The Sixers were once down 15 at the end of the third, in the Palace and came back and won the game without arguably their best player. This is the win that gets 'em going! I feel it!

-Overall, this was the most satisfying game of the year for me, by a mile. It reminded me why I was so excited about this team.

Kool & The Gang - Celebration (via universalmusicgroup)

Player of the Game: Fat Ludacris