That's my team. Those are my Sixers.

Share All sharing options for: That's my team. Those are my Sixers. 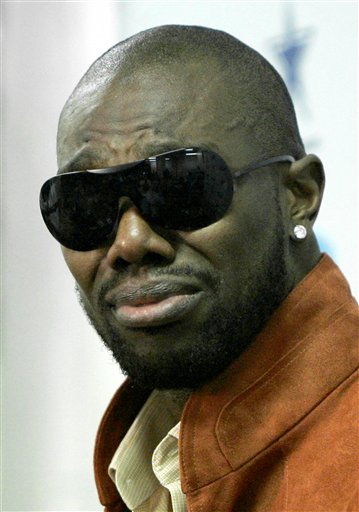 I feel a little like my boy T.O. up there. I'm sad. I spent the entire summer waiting for this season. I haven't been this excited for basketball in forever. All the moves felt so good. Our GM could do nothing wrong. I thought this team was going to be good. I really did. I thought wrong. Now, I know it's a long season and they still could develop into the team I expected them to be, but the first six games really opened my eyes. Not only have they been horrible, but nowhere near fun to watch. The lone bright spots, Thaddeus Young and Marreese Speights are the only things keeping me sane right now.

I can't blame one person for this depressing start, so I'll blame everyone. Let the "Blame Game" begin.

Andre Miller: I start with you Andre. You are supposed to be the leader of this team. You're supposed to run the offense. Andre, do you know you lead the team in shots? That's right, a team with a career 20-10 guy in Elton Brand, a potential 20-point per game scorer in Iguodala (I'll get to you later), an Allen-Iversonesque scoring machine in Lou Williams and an emerging star in Thaddeus Young and you're taking the most shots? Andre, you and your ugly line drive jumper should be taking less shots than all these guys. Get 10 assists a game please. You are not a scorer. You will never be a scorer, so stop shooting! It also doesn't help you're cause that you are shooting 38% from the field. You are definitely my number one culprit for the early season woes. Oh, and while I'm at it, stop throwing stupid alley-oop passes dude.

Andre Iguodala: So you think you can sign a monster contract and come back and play worse, not even the same, but worse than you did last year? That's not going to fly man. You claimed that you have been working on your jumpshot all summer and maybe you have been, but you still can't shoot. You're shooting worse than Andre Miller's 37%. Stop trying to show off with your fancy passes. Stop driving to the basket to commit a charge or turn the ball over any other way. I can't tell you what to improve, because apparently you already worked extra hard on your jumper. I have an idea; just give half of your new contract back.

Another thing. Last night I was lying in my bed, watching the end of the other TNT game between the Blazers and Rockets. Neither one of those teams would have been in that game if not for their go-to, "ice in the veins", clutch, killer instinct guys, Tracy McGrady and Brandon Roy. Iggy, until you develop a real jumpshot, you'll never be able to be this type of player. That might be alright though, because it looks like we're developing one of our own. I love you Thaddeus.

Lou Williams: I like you a lot. You are extremely fun to watch and remind me of another player that used to b all here. You might have heard of him-Allen Iverson. However; you're not as good, obviously. You should probably stop dribbling around so much and pass a little more often. Have a better shot selection and turn the ball over a little less. These are all things I know you can do and they're fixable. And you are only playing 20 minutes a game and shooting a higher percentage than both of the Andres. You're a little to blame, but not too much. I'm not going to blame you for you're inability to run the offense, because that's not who you are. That's on your coach.

Mo Cheeks: Mo, I'm one of those people who thought you were a good coach. Shame on me. Number one, this team does not look like they are being prepared for games properly. They are playing horrible defense and they looked befuddled with Elton in the offense. They don't seem to be feeding him the ball as often they should and when he does catch the ball, he is immediately doubled and tripled team. The team does not know how to react to this. This can all be pointed at you, Mo. Lou cannot play point guard, so stop playing him there. Marreese Speights should be our number one big man off the bench. And Willie Green should never play. Ever. Play Lou Williams more. Play Kareem Rush more. At least he can shoot a three. Willie Green sucks so hard, so quit playing him. We've already established he's good for four good games per season, so when he enters the game there's a 2:41 chance that he'll have a good game. Get it together Mo.

Ed Stefanski: You put this team together, but I can't bring myself to blame the Greatest GM on Planet Earth.

Ahh, that was therapeutic. I'm not trying to bash any of these guys (Well, maybe Willie Green) or the team because I still think the Sixers can be good and most of their problems are fixable. I was just venting a little, after all it is the "Blame Game". The team has four days until the next game and I sincerely hope and believe that these problems will be addressed. It doesn't get any easier from here though. Tuesday the Sixers host the Jazz and then travel to Toronto the very next night. I'd love to see the Sixers play disciplined and inspired ball, regardless of the final score, but no matter how bad they suck, I'll still love 'em, each and every one of 'em. Even Willie Green.

That's my team, those are my Sixers.

P.S. Check out dp8039's dope FanPost to the right. That's what a FanPost's supposed to be folks. Let's get some more of those going.