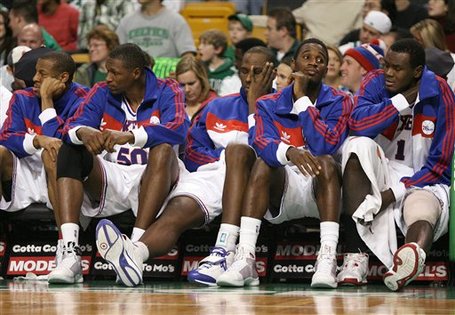 I've seen enough. The Sixers were out-played, out-classed and out-coached in every aspect of the game tonight. The Celtics showed why they are the defending champs, playing ferocious defense, displaying intensity, hunger, heart and all those cliche terms used to describe a championship team. The Sixers were the anti-Celtics tonight. They looked confused and one of my least favorite announcers, Tommy Heinsohn put it best when he said the Sixers looked like they were thinking, "We cannot beat this team." He was absolutely right. As currently assembled, the Sixers are not a championship team, they are not contenders and they might not even be a playoff team.

(Here are a couple quick things I liked that I didn't want to get lost in the shuffle of the horrible game:

-Elton Brand came to play tonight. He's starting to look like the guy we all thought he would be. He came out and score 18 points on 8-14 shooting, grabbed 8 boards and did not commit a single turnover. Bravo Elton, bravo.

-Lou-Will had a vintage Lou-Will line. I'm not worried that it was in garbage time, because that's where he got most of his playing time at the beginning of last season. This game can be a nice confidence builder and maybe he'll get back on track. Tommy Heinsohn was obsessed with him. He scored 15 points on seven shots, dropped 6 dimes, got 3 steals and went turnover-less. Love me some Lou-Will.

-Marreese Speights had some nice dunks in garbage time, and a hard foul with 43 seconds remaining. It got him ejected, but at least he showed he isn't afraid of the big, bad Celtics. He has a lot of elements. He needs more playing time.)

I'm fully aware that 16 games into the season is not a good time to pronounce and team dead and I'm not doing that. I'm saying, without some sort of change this team will not be good and I think that is very evident after watching the first 16 games. A change needs to be made, and made soon. I cannot reiterate that point enough. Before I delve into anything else I want to look at the upcoming schedule.

If the Sixers play like they have been, they could easily lose six of their next seven or all seven. The Bulls are all of a sudden playing solid basketball and I don't know if you've heard, but they have a monster point guard by the name of Derrick Rose. I can't wait to see how badly he destroys Andre Miller. The Lakers are probably the best team in the NBA. The Pistons are still good and you know Iverson is going to get himself up for that game. The game against the Nets is winnable, but not a foregone conclusion with a backcourt of Devin Harris and Vince Carter able to go off any given night. Then two straight vs. the Cavs, who are destroying every one in their path right now, led by King James. That would leave this team sitting at either 8-15 or 7-16. If that happens and a move isn't made immediately, I'd be shocked.

What kind of changes are we talking about? Well, there are some possibilities.

The consensus among Sixers fans has been this change indeed. The poor half-court offense can be put on Cheeks for not having good enough plays, if any, or offensive sets. The poor defensive rotations can be put on Cheeks for not coaching the players on when to leave their man and when not to leave their man. Ray Allen shot 21,567 uncontested shots tonight and while it was good for my fantasy team, it should never happen with a shooter as good as Jesus Shuttleworth. The poor substitutions are definitely all Mo's fault. He needs to stop playing Willie Green, Reggie Evans and his new favorite player Theo Ratliff. Marreese Speights needs to be on the court; he brings so much more to the team. So what if he makes a couple rookie mistakes, he's still way better than Evans and Ratliff. I'm still convinced that if Stefanski didn't step in last year, Thad and Lou would still be stuck on the end of the bench and Philly wouldn't have sniffed the playoffs.

No one is questioning whether Cheeks is a good person. I like him as a person, just not as a coach. We all remember this. He seems to know his players and his players seem to like playing for him. He's probably pretty basketball smart, being the point guard of a championship team, but for whatever reason it doesn't translate to his coaching. Usually when a team with a lot of talent and expectations fails to live up to the hype, the finger is pointed at the coach. There is no way this team should be 7-9 and possibly even worse in the next week or so. It might not be completely Mo Cheeks' fault, but he'll be the first one to go if things continue.

Possible replacements are Avery Johnson, Jeff Van Gundy or Eddie Jordan. I have no explanation on why I threw those names out there. They seem like logical choices, but as I've learned throughout my sports fandom, things never work out the way I think they should. If Cheeks was fired the Sixers would probably hire someone the fans like even less than Cheeks. It'd be a change nonetheless, and that is what's needed.

2. Trade either Andre Miller, Samuel Dalembert or both.

Andre Miller has been garbage all season. From the games where he tried to take over to the stupid half-court shot with three seconds left (sorry, I just can't let it go) he completely sucks. He's shooting 42% on the season and if history tells us anything, it's that his shooting percentages aren't very good when he's teamed with Elton Brand. When they played together on the Clippers his field goal percentage dropped from 45% the previous year to 40%. Sound familiar? Last year he shot 49%. That's far from his 42% this year. The common denominator in the huge drop off is Elton Brand and he isn't going anywhere.

The question remains, what kind of trade value does Andre Miller have? Not much. The only two contenders I can find that might be interested in a veteran point guard are the Blazers and Rockets and I'm not sure they'd rather have Andre Miller instead of Steve Blake or Rafer Alston respectively. Both Blake and Alston stretch the defense. Miller doesn't. The only value Miller might have is an expiring contract, which carries a little more weight these days with the summer of 2010 fastly approaching.

What would I want in return for Miller. A capable shooter with enough talent to be our starting point guard for the time being. I even like the idea of acquiring a shooting guard who can actually shoot and start the Andre Iguodala-point guard experiment. That would never happen though; the Sixers aren't that desperate yet.

On to Samuel Dalembert. He's overpaid. He has the lowest basketball IQ in the NBA and is just standing in the way of a Marreese Speights explosion. I realize that sounds a bit inappropriate, but I'm going to leave it for comedy purposes. Point being, Speights is just as good, if not better than Dalembert at this point and much cheaper. Yes, Dalembert is a better defender... sometimes. Dalembert has shown stretches, or quarters where he absolutely shuts down the opponent's best big man, Tim Duncan and Kevin Garnett specifically, but that was last year. This year he has failed to do barely anything of value and if we aren't going to contend, we might as well get rid of our horrible contracts and get a little younger. Give Speights some time to develop and he will be a monster.

The market for Dalembert would be higher than for Miller. The Pistons could use a center, the Heat could use one, the Mavericks, the Spurs, just to throw some names out there.

This could go hand-in-hand with number two. If Miller or Dalembert is traded, obviously their would be a change in the starting lineup. Otherwise, I think this is the least drastic and most realistic change possible. Cheeks might attempt to save his job and bench Dalembert for Speights. Dalembert did play very well off the bench early in his career. Thad or Iguodala could also be moved to the bench, not necessarily as a demotion, but to help the second unit. The first unit obviously isn't clicking and a Lou-Iggy backcourt in the second unit would be pretty productive. I'm open to nearly any lineup change as long as it doesn't involve Willie Green. Don't even get me started on him. He needs to be cut.

Something needs to be done and I think it will be after the upcoming seven game stretch. I have faith in the greatest GM on planet earth.

Player of the Game: Elton Brand

Favorite Open Thread Comment: "And that was goaltending on the pussy"-jemagee