Share All sharing options for: Sixers lose by two. 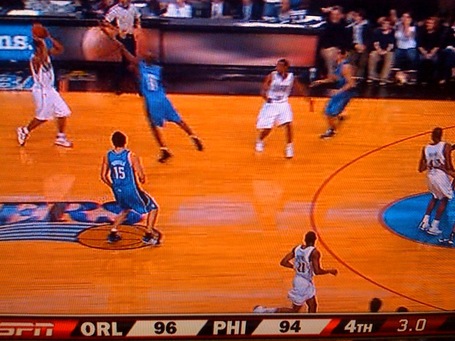 Man, I don't even know where to start. The Sixers sucked in the first half, but were somehow still in the game. Then the Magic started sucking in the second half and the Sixers took the lead. (In depth analysis, I know.) And in the end, Rashard, or Rasheed Lewis, as Hubie Brown likes to call him, hit a corner three pointer to give the Magic a two-point lead. Thaddeus Young left him, bad perimeter D yet again. The game wasn't over though. There was still 4.7 seconds remaining, which is plenty of time to get a clean look at the basket. Plus, the Sixers can call timeout and advance the ball right? No. Mo Cheeks decided to leave zero timeouts for the end of the game. Surprise. Regardless, 4.7 seconds is a reasonable amount of time to dribble the ball up court, make a pass or two and get a good shot off. That's far from what happened. The Sixers supposed veteran, savvy, point guard decides to dribble for a total of 1.7 seconds before throwing up a contested half-court shot with 3 seconds remaining. Don't believe me? Take a look at the picture above, courtesy of my iPhone. It was a bonehead move, but I can't blame the loss on a single play, because there were plenty of other reasons Philly lost, and they are the same reasons why They've been losing games all season.

-Bench play, even though they did better tonight.

Bottom line is, the team has a ton of issues and they were lucky to even be in the game tonight. It's going to take some time to fix these problems and most people on this blog think firing Cheeks would resolve, or at least improve all of them and I really can't disagree. I'm not 100% on the "Fire Cheeks" bandwagon just yet, but I mean, how much more mediocre basketball does Sixers management have to see before making a change. This team obviously has some talent, but aren't showing it right now. Is that the players' fault or the coach's? It remains to be seen.

My two favorite things about this game were the play of Elton Brand and Marreese Speights. Brand had a really nice second half and put the team on his shoulders for stretches of the game. He's starting to show signs of the old EB. And Marreese Speights, wow. I predicted a big game for M16. I just felt it. Hubie Brown put it best when he said, "It's just his night." In 13 minutes Speights dropped 12 points, grabbed three boards, had a nice steal, took a charge and hit a half-court-buzzer-beater. Hmmm, maybe he should get some more playing time, just a suggestion.

By the way, Hubie is a lame announcer, but he was entertaining. He was eeriely aroused by Dwight Howard's body and uttered the sentence, "I like Willie Green." Your a bad man Hubie.

I'm sure I'll have some posts up tomorrow, but if not, or if everyone's too busy to comment, have a happy Thanksgiving and don't do anything I wouldn't do.

Player of the Game: Elton Brand

Favorite Open Thread Comment: "Dwight Howard has the most beautiful arms/shoulders in the NBA. Like a greek god. And no, I am not gay."--FuquaManuel