Sixers blow another big lead; hold on for the win

Share All sharing options for: Sixers blow another big lead; hold on for the win 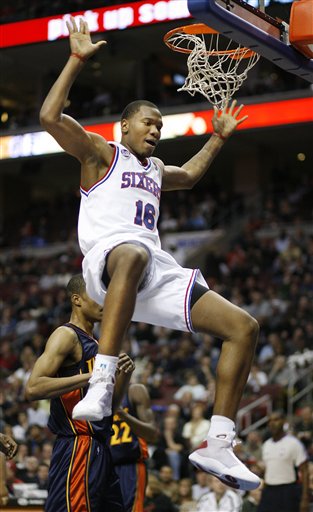 The Sixers came out in the first half and nearly ran Golden State out of the gym. Normally their lead would have evaporated as soon as the second unit came into the game, led by Willie Green. Tonight was a different story. Mo made some key adjustments to make the transition from the first to the second unit smoother. Instead of bringing in the sorry Willie Green as the sixth man, he brought in Lou-Will and Speights for Iggy and Brand. Later he brought back Iguodala and Brand to play with three benchies. I must say, the new rotation worked well, as the Sixers took an 18-point lead into the locker room.

The second half was a different animal. Iguodala picked up a quick fourth foul, with nine minutes and 27 seconds remaining. To note, when he sat the Sixers held an 18-point lead. In comes Willie Green, lead slowly leaves, momentum disappears and it's a fight to the finish. Luckily the vets stepped up down the stretch-again. Andre Miller drilled another big three-pointer. Elton Brand played like a man for the entire game, showing signs of his former self. It was against the Warriors' poor defense, but hopefully he'll get on track here real soon. Andre Iguodala contributed a lot of positives, shooting better, rebounding, playing defense and making some beautiful passes. I'm really starting to appreciate his game.

It wasn't pretty, it wasn't textbook, but the Sixers found a way to get it done for the second game in a row. They now stand at 7-6, above .500 for the first time all season. Tomorrow they travel to Charlotte to play a bad Bobcats team, another important game to win, because after that, they have a date with Superman and the world champion Celtics.

Tonight was a very solid win and I'll take as many of those as I can get. All the little things and team chemistry will come as the wins do. My fantasy team is also on it's way to a 7-1 victory and sole possession of first place. I've had myself a very nice Sunday.

Player of the Game: You could make a case for any of the starters, so all of 'em.