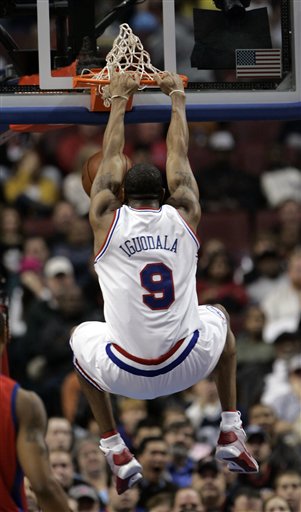 Big win. It was far from pretty, but the Sixers stepped up when it counted. The vets--Andre Miller, Andre Iguodala and Elton Brand led them down the stretch to a tough victory and avoided a huge letdown in a home game against the Clippers.

Twelve games into the season, this is the Sixers' identity. I have watched each game, feeling disappointed nearly every night. After watching last night's game, I'm done being disappointed. For whatever reason the Sixers aren't the team I thought they would be. That could be because of my unrealistic expectations or the simple fact that they are not playing up to their potential. Either way, they are who they are until further notice.

The Sixers M.O. is to come out in the first quarter and play well, led by Thaddeus Young. Everyone seems to be on their game for the first 8-12 minutes. Then the second unit comes in, the opposing team makes a run and the rest of the game is a grind. That is exactly how tonight's game went, but the Sixers' showed a lot of heart down the stretch and came out with a win. It wasn't pretty, but they got it done and you know what, I'll take it. Normally I would be very frustrated by a win like this, but I'm not for two reasons.

1. This is the reputation this Sixers have earned for the first part of the season and until they put together a stretch of really good basketball, I won't expect any easy wins, even against 2-9 teams at home.

2. I saw some encouraging things. I feel like this season has been full of negativity and pessimism. From here on out I'm going to look at all the positives and roll with 'em and tonight I saw quite a few.

-Thaddeus Young gets better every game. He is exciting to watch and my man-crush continues to grow. However; he disappeared in the second half, again. I can't figure out why he flames out in almost every game, but if it's because Mo isn't running any plays for him, he needs to start. Our half-court offense isn't very good as is, so run some plays for Thad.

-Andre Iguodala played a fantastic game in my book. He still didn't shoot well and have five turnovers, but he was a playmaker the entire game. He played great defense down the stretch. He came up with a huge "and 1" at the end of the game. He had 12 assists, most of them being beautiful fastbreak passes. He continues to rip rebounds away from bigger players. I loved what he did tonight.

-Andre Miller played much better. He's not shooting as much as he did in the beginning of the season and is starting to run the offense better. Not good, but better.

-Marreese Speights was all over the place. He made some open jumpers, he took a charge, showed energy on the glass. He's still raw, but a monster talent.

-Reggie Evans playing at all. He just doesn't do the same things for the team as he did last year. Speights can give the team everything Reggie can, and much more. Reggie is an offensive liability and has been playing poor defense this season. His minutes have been gradually declining since Speights emergenc e, but I'm greedy and want to see Speights take all of his minutes.

-Lou Williams has lost all confidence. He can't score. He can't pass. He can't play defense. He's in a major slump right now and needs to find a way to snap out of it. Slumpbuster.

-Elton Brand looks so awkward. His favorite move is to ram his shoulder into the defender and put up a fadeaway jumper. Yes, he had 5 blocks. Yes, he hit the go-ahead shot, but he is shooting 42% on the season and is averaging 3+ turnovers a game. The Clippers announcers mentioned many times that he didn't look like himself. That's interesting, because these are the guys who watched Elton for many years. They aren't very good announcers, but I'll take their word for it on this one. To be honest, I barely watched Brand prior to this season. If they say he doesn't look the same and continue to reiterate the point, I believe them. I'm starting to believe he's not all the way back from the injury. It would also be interesting to check out ClipsNation reaction to Brand.

-We need a backup point guard.

Again, it wasn't pretty, but I'll take it. Next up is the Golden State Warriors.

Player of the Game: Andre Iguodala

Favorite Open Thread Comment: "Did that ralph waller idiot just call him sprites?"--jemagee (Yes, he did, like a thousand times and it really pissed me off.)