DISCLAIMER: Some of these posts may look familiar to the loyal readers from Sixersoul. You are not crazy. These posts were taken from my old site, edited and added to Liberty Ballers. This helps us avoid starting with a blank blog and it also gives any new readers a chance to accommodate themselves with the writing, so they know what to expect at Liberty Ballers. If you've read this before, bare with me. The posts will be brand new after these first 3-4 posts.

I can watch the celebration over and over and over again and still not know what it's like. Unfortunately, I've never experienced any of my teams wininng a championship (I actually have, but I definitely wasn't old enough to comprehend) and I'm sure it's the same for the most Sixer fans. Just once in my lifetime. Just once, I want to feel it. I want to get rewarded for all the time and emotion I invest in my teams each year, instead of having my hopes and dreams crushed every year. Just once, I want to run into my front yard and douse myself in champagne. I want to wear a "Sixers, Cowboys or Astros" World Champions t-shirt for an entire year. Just once.

25 years. Can it be considered a curse? That’s how long it’s been since the 76ers (or any other Philadelphia team) have won a championship. Since then there’s been a ton of talent (Shawn Bradley cancels about half of it out) to come in and out of Philadelphia. First there was the "Sir" Charles era, along with Hersey Hawkins and Rick Mahorn. No championship. There were Shawn Bradley, Jerry Stackhouse and Derrick Coleman sightings. No championship. Finally, the supposed savior Allen Iverson arrived. He took the team to the Finals, but we still have no Larry O'Brien trophy to show for it.

Now a new era is upon us. I’m not exactly sure what it will be known as ten years from now. Will it be the Elton Brand era? The Andre Iguodala era? That remains to be seen. We also have no idea how it will play out. As I sat in my luxurious office (In my room, in front of my TV on my "Super" Love-Sac) late last night, I wondered, "What are some realistic expectations for this revamped Sixer team?" Will the Iguodala/Brand era (that’s what we’ll call it for now) bring Philly a much deserved championship? Will wearing the 60th anniversary jerseys/patches be enough good karma to be the last team standing? As all these questions ran through my head I thought, "Man, it’d be sweet to take a break from 'Pacman Jones in more trouble' and look at the best case and worst case scenarios for not only the 2008-2009 team, but each individual player." So, without further adieu, here they are (Keep in mind, I’m not saying the team or players will either have a "best case" season or a "worst case" season, because they’ll probably fall somewhere in the middle, so some stats might be a little high or a little low.)

Best case: The best case scenario for Miller would be to play almost identical to the way he played last season. This is a contract year for the 32-year old vet, so I don't see him playing worse. His scoring will drop, but reasonably so, since Elton should score quite a bit. His assists will go up with Brand down low. Miller should play like the true point guard he is, run the offense, be a leader on the court and remain a lock to play all 82 games.

Worst case: The worst case scenario for Andre to completely fall off from last year, which is definitely possible since he had a career year and isn’t getting any younger. I’d even say there’s a slight possibility that Miller plays poorly enough to warrant a trade, just to get something for his expiring contract. I mean, I thought Miller was done at the beginning of last year.

Best case: Lou has a lot to build on from last year. At times, he looked unstoppable and AllenIversonesque. I’m sure he’s vastly improved (if game one of the pre-season was any indication) and will see a solid minute increase this season. Best case for Lou is he plays the Leandro Barbosa role on this year’s team, coming off the bench a providing a huge spark on offense and providing occasional rest for Andre Miller.

Worst case: If he plays like he did in December and January last year, shooting 35 and 38 percent, respectively. It’s also possible Lou could come in and completely stall the offense a la Willie Green and not only NOT contribute, but hurt the rest of the team in the process. For the sake of Elton Brand being a Sixer, let’s hope Lou improves his 3-pointer this season.

Best case: Ivey plays less than 5 minutes per game and plays them effectively.

Worst case: Ivey plays more than 5 minutes per game and plays them ineffectively, plain and simple.

If Ivey plays more than that, it will be because either Lou or Miller got hurt, Miller got traded or we brought back Jim O’Brien as our head coach. Any of those scenarios would cause me serious pain.

Best case: The reports of Iguodala working on his jumper and watching film at 3 in the morning are true. He flourishes as the number 2 option behind Brand and continues to improve each season.

Worst case: Iguodala’s head continues to grow. He regresses due to his new 6 year/80 million dollar contract and plays like he did in the playoffs against Detroit. All possibilities, but I’d bet on the best case over the worst case any day.

Best case: Best case for my least favorite player Willie Green is to be a scoring threat off the bench. We all know he’s a talented scorer and maybe, just maybe a reduced role will cut down on his stupid plays and he can provide a nice spark off the bench. That’s the best case scenario for the team, but I wouldn’t mind seeing him get traded either.

Best case stats: Around 15 minutes per game, less than a turnover a game, 7 points on more than 44% shooting or traded

Worst case: Willie plays 1 on 1 like he did last year, takes bad shots and turns the ball over in an extended role since Mo seems to like him so much. I don’t want to see him take any minutes away from Lou or Kareem Rush (my opinion might change on that once I watch Rush consistently) unless he matches up better with a particular player.

Worst case stats: Over 20 minutes a game or starting shooting guard, more than 1.5 turnovers a game and fewer than 42% shooting

Best case: Rush comes in a hits a few threes to spread the half court offense.

Best case: Thad takes a huge step toward an All-Star caliber player, improves his ball handling and jumper drastically (He looked horrible in Summer League, but TC and pre-season have been a different story) and plays within himself. Thad should flourish as the 4th scoring option in the starting lineup since he can’t seem to create his own shot yet.

Worst case: Thad plays like he did in the Summer League and turns the ball over a ton along with bricking open jumper after open jumper.

Worst case stats: 8 points, 3 rebounds, less than a steal and more than a turnover per game on fewer than 50% shooting

Best case: Finally, we get to Elton Brand. He’s coming off a ruptured Achilles and he’s never played a game with this team (unless you count pre-season where he looked a little rusty). The best case scenario is Elton plays like the Elton of old and is a dominate force in the post, along with a defensive and rebounding presence next to Dalembert.

Worst case: Elton is just a mere image of his former self, is injury plagued throughout the season and makes Sixers fans think, "Is this really the first year of a five year deal?" Although the best and worst case scenarios are so much different, both are realistic.

Best case: Reggie! Reggie! Reggie! Best case is Reggie does exactly what he did last year; provide energy, swagger and rebounding to a young team. He definitely won’t play as much as he did last year with the acquisition of Brand, but oddly enough Reggie is the player I’m least worried about. He’s been a stud role player his whole career. He might even steal the show from Brand’s return to LA by reuniting with his old friend, Chris Kaman.

Worst case: Gains weight, gets out of shape and lets the big playoff shot get to his head, provoking him to shoot fade away jumpers.

Worst case: Just when Jason Smith was looking like a solid NBA role player, a torn ACL ends his career.

Best case: Speights plays anything like he did in the Summer League and steps into the hole left by Jason Smith. I could see Speights playing the role Thad did last season. As the season goes on, his minutes could slightly increase and be a nice rotation player.

Worst case: I really can’t see a worst case for Speights. The only thing I could think of is a serious injury because even if he doesn’t play at all or plays in the D-League he’ll still develop nicely and be ready to blossom into the next Amare down the road.

Best case: Sammy D had an excellent year last year. He's not expected to score much, but if he could actually finish a dunk or stay away from the T.O. school of catching, it'd be nice. As long as he stays consistent and plays good defense against the opponent's best post player he'll flourish next to Brand. His mid-range jumper has also become cash money.

Best case stats: 11 points, 11 rebounds and 3 blocks. I don't see his numbers improving that much, especially with Brand taking some of his scoring away, along with some rebounds.

Worst case: Goes back to his fouling ways, shoots fewer than 50% and turns the ball over too much.

That brings us to the team as a whole. I've already delved into the Sixers schedule and made my prediction on their record, which was 52-30. That being said, the team could be much better than that, or much worse.

Best case: Best case is obviously a championship. It's not very likely, especially with this being their first year together and Elton coming off a serious injury. That doesn't mean it isn't possible though. The Sixers basically have to have EVERYTHING go right for them, but I'll put it like my boy JP from Angels in the Outfield would, "It could happen!"

Worst case: Unless some serious injuries occurr or a trade of Andre Miller, I don't see this team missing the playoffs in the East. I say worst case scenario is 7th or 8th seed, as long as they stay healthy.

Let's hope this image will be in our near future (insert Sammy D and Lou-Will in Posey and Walker's place): 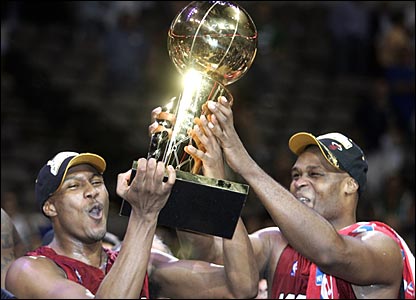